A game in the "metroidvania" style. Its narrative mixes elements of the history of the Brazilian "Cangaço", its popular "cordel literature", and the Divine Comedy of Dante Alighieri. Find all six artifacts, face 5 bosses, get new skills and gain access to new areas in this purgatory visually inspired by the art of woodcuts. All of this in 8-Bit graphics and sounds, simulating Game Boy and Super Game Boy games.

The game can be installed in three versions: Portuguese; English, or Monochrome. Below you will find the link to download the game, a text about the production, and GIF images of the game in action. 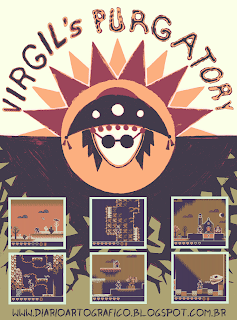 A little about the production of this game:

It all started with the itch.io website call for the "GBJam5" ​​competition, where the participants have 10 days to produce an original game that was limited to the resolution of 144X160 pixels, and only 4 colors of free choice, as well as in the super gameboy (SGB: adapter to play games of GB laptop in Super Nintendo). I had some loose ideas, including that of the character with a bull skull in place of the head, and at Ju's suggestion, I set the game in the northeastern backlands of Brazil. Soon came the association with the "cangaço" (similar to the wild West in USA), the Cordel literature, and other associated cultural references. Some time before I was reading the verse version of the Divine Comedy, and I have a fixation on Bosch's paintings, and soon it all mixed up to create the game's narrative.

Speaking of the narrative, I tried to use as little text as possible. The introduction, which suggests that you are a dead person, decapitated, and who falls into some sort of purgatory (suggested by the title), already takes care of introducing the story. The texts of the pilgrim (inspired by "Antônio Conselheiro", from the "Canudos war" in Bahia at the end of the 19th century), help if the player does not know what to do at any point in the game, as well as contribute to the narrative. Obviously that these texts should be in simple and short verses, as well as "cordel literature", and indirectly as the type of medieval literature in which both this type of book and the work of Dante have in common.

As for the graphics, it was a challenge to make the game as colorful as possible with just 4 colors. I tried different palettes, but I decided that this one had more relation with the woodcut, with the cangaço, with infernal scenes (warm colors), besides giving me a greater range of "predominance of colors", being able to vary the scenarios. Again, my challenge was to overcome some limitations of ARGS (Arcade Game Studio), including that of resolution, something easily solved with the addition of borders in the forward layer of the graphics. The sound of the game was composed with Mario Paint Composer, unofficial version for PC, with a NES sound font.

So, thanks for reading, and enjoy the game. Play it, help to spread the word, the game is free and is available on the internet for Windows computers (Linux users, I have never tried on Wine, if they succeed, let me know). And if you are interested in having access to the source code (actually, to ARGS project files of the game), to use graphics or sounds in your game, or to learn how to do something similar in ARGS, the original files are available for $5 Dllars  in itch.io site. I always intend to distribute my games for free, but the source code, from now on, will always cost a fee.